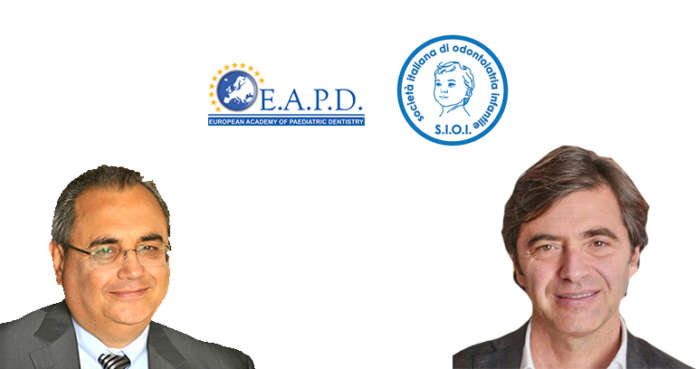 Dear president, could you please explain to the italian colleagues what exactly the EAPD is?

I believe the best description of the purpose of the Academy is presented in the constitution of the Organisation and it is:

This is the primary purpose of the Academy.  In order to materialise this purpose, the Academy implements a lot of activities with different scope.  These activities include educational activities such as Congresses, seminars, webinars etc., but it also produces guidelines for undergraduate and postgraduate education in paediatric dentistry.  The Academy collaborates with other national and international organisations in order to promote the oral health of children.

Several countries and different cultures:  how is the collaboration among paediatric dentists from the different nations?

This is always a challenge in Europe.  Our Continent includes 44 different countries with 24 official languages and more than 200 languages spoken.  If you add the different cultural and financial customs of different groups, anyone can understand the difficulties bringing all these people under one umbrella and  for the common purpose of advancing paediatric dentistry for the benefit of children.  The EAPD since its beginning in 1990, just over 30 years now, has grown from an Organisation that involved about 50 people from 12 countries around Europe (as many as the number of stars on the logo of the Academy) to over 1.500 dentists from 48 countries, of which 38 are European and the rest from all over the World.  If someone just considers these numbers, it is easy to understand the progress the Academy has achieved over the past decades and the importance and difficulty of having all these different Nations working under the same umbrella with no conflicts.

The covid-19 pandemic ran over the world and changed practically everything.  how did it change EAPD activities?

COVID-19 has changed almost everything in our everyday life and it is not possible it would not have affected the function of EAPD.  The first and most abrupt effect of the pandemic was the difficult decision the EAPD had to make, along with the support and understanding of our German Colleagues, to change the preparations of the EAPD Congress in Hamburg in 2020 to an on-line event.  That was a very difficult decision as we were all very early in the pandemic and we did not know many things, while almost every aspect of the Congress was already planned and the organisers had put a lot of work and heart into organising it and even down payments had been made, and all these had to change within 4 months.  Finally, with the hard work of the local committee and the EAPD we had a successful Congress.  A similar decision was necessary for the Interim Seminar in Oslo this year, which was successfully held on line again a couple of weeks ago.  During the time of the pandemic, all the administrative functions of the Academy had to be organised to be held on-line.  Board meetings, committee meetings, council meetings and even the elections for the new members of the different offices had to be done online in a proper, transparent way and in line with the Bylaws of the Academy.  Now looking back, I can tell you that everything worked exceptionally well but it took the knowledge and the effort of many members of the Academy.

Which is the eapd programme for your presidency period?

As President Elect, I was preparing some ideas for my Presidency term regarding the infrastructure of the Academy.  The past 15 years I have been involved with the Academy, I have seen a constant growth in numbers but also in the different functions of the Academy.  It was apparent to me that we need to further improve the infrastructure of the membership management of our members.  This is an effort that started in 2015 and now had to go to the next level.

A second matter that I was planning is regarding services that the Academy can offer to the members.  Financially the Academy is very stable, and I believe we need sponsor some services that will benefit our members.  The pandemic and the immediate problems we had to confront have slowed down these plans but have not stopped them.  We are in the process now of upgrading our membership management system and making many functions more user-friendly and quick.  On the other hand, two of the programmes that the Academy has implemented, the Hermes and the Athena project, were not possible to run during the pandemic.  The Hermes project sponsors 1 or 2 day events in countries where Paediatric Dentistry is not very developed in an attempt to bring the specialty under the spotlight.  The Athena project is a day or a day and a half event where the EAPD fully sponsors the scientific and organisational part and invites 50-60 young members of the Academy to participate with no registration fee.  Obviously, it was not possible to run either of the two events during the pandemic.  As an alternative, the EAPD launched a new programme, the Galileo project.

What about the Galileo project?

The Galileo Project is a series of 6 webinars on different subjects that will take place within a year’s time.  The webinars do not have a registration fee and they will be available only for the members of the Academy;  3-6 months after the seminar is broadcasted depending on the consent agreement we have with the speaker.  It is a project that we consider very important and is a service we initiated for our members during the pandemic period but there is serious consideration to be extended.

As you know, Galileo was italian.   what about the collaboration among the EAPD and the italian paediatric dentists (and sioi, the Italian Society of Paediatric dentistry)?

The EAPD is open for any collaboration with the SIOI and any other Society that promotes Paediatric Dentistry in Europe.  Actually, these collaborations are in the core of the goals of the Academy.  Our purpose is to work together with the Paediatric Dentists of a country to identify the local oral health needs and help in any way we can to promote them.

EAPD, since its establishment, has paid a lot of attention to our young colleagues.  This attention is strengthened during the years as the Academy became more established.  In this effort during the years the Academy had the support of National Paediatric Dentistry Societies that sponsored awards.  The Dutch Society for Pediatric Dentistry (NVvK) has sponsored an award during 4 congresses and currently the Swiss Association for Paediatric Dentistry (SVK ASP) is sponsoring an award for 5 Congresses for a topic relevant to sedation.  During every EAPD Congress 4 or 5 awards are announced, some of them are awarded using scientific criteria (2 Young Scientist award and presently one more sponsored by the SVK ASP) and 2 more are given to support young researchers in order to travel to the congress (2 EAPD Young Researcher Travel Awards).  During the Interim seminars the Academy usually announces 3 or 4 awards which follow the same concept as in the Congresses.

Moreover, students enjoy a considerably reduced registration fees for all functions of the Academy.  Also, 4 years ago the Academy has launched the Athena project which refers to the Academy’s young members as I mentioned earlier.

Finally, italy recognised the specialty of paediatric dentistry, too.  is there any EAPD activity to homogenise the different educational programmes?

The EAPD Board has assigned to the Educational Committee to update the “Framework for Undergraduate Education in Paediatric Dentistry”.  The Committee has put a lot of effort in this matter for the past 2 years and there will be a dedicated session during the next EAPD Congress in Portugal, where all these recommendations will be presented and discussed one more time before they are approved as the official recommendations of the Academy.  A similar task will start then on the “Curriculum Guidelines for Education and Training in Paediatric Dentistry”.  This is an essential matter so there are current recommendations by which the EAPD will be able to evaluate post graduate programs and also programme directors will obtain a standard to which they should target their educational activities.

Homogenising the educational programs is a very difficult task to achieve as they are designed and run accommodating many different needs for every country.  The EAPD though has the task of suggesting the ideal content of a training programme in Paediatric Dentistry so the different program directors have a road map if they want to converge towards this position.  In order to promote this homogenisation as you mentioned, the EAPD has already introduced many years now the concept of the “Accredited Programmes”.  Every Postgraduate Paediatric Dentistry programme can apply to the EAPD to be evaluated based on the EAPD Guidelines.  EAPD representatives visit the programme to review the educational content, the faculty and the students and suggest a recommendation whether the programme can be included in the “Accredited Programmes” or not.  The Accreditation is valid for 5 years and the programme should be evaluated again.  The purpose of this process is not to judge a programme but rather to work with the faculty in order to improve various aspects that need improvement in order to increase the standards of the overall program.  So, I encourage Programme Directors around Europe to review the requirements of the procedure posted in the site of the EAPD and come in contact with the Chair of the Educational Committee so there will be an initial review of the programme and receive assistance on how they should proceed in the process.

Italy is waiting for you here, the most wonderful country in the world…

I am always keen to visit Italy because I have really good friends in Italy and we can enjoy time together while also working productively at the same time.

Thank you very much for giving me the opportunity to communicate with my Italian colleagues and present the goals and some of the functions of the Academy offers to our members.   Looking forward to visiting Italy.